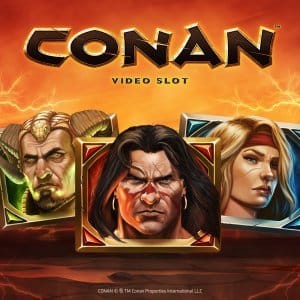 Go on an adventure on this 6 reel, 3 rows slot with various features and a RTP of 96.01%. Conan was released in September 2019 by NetEnt and is considered a medium to high volatile slot. The game comes with 24 betlines, three different free spins bonuses with different volatilities and a bunch of great base game features. Finally yet importantly, the slot pays both ways!

Conan is a warrior’s world with dangerous snakes, great warriors and evil criminals. The slot represents everything from this world in its symbols, and the features available. The highest paying symbols are Conan himself followed up by an evil snake man. The third highest paying symbol is a hardcore woman warrior with a headband and blonde hair. The medium paying symbols are represented as a helmet, a sword and a grappling hook used to climb walls! The lower paying symbols on the Conan slot are represented as coins with a lion’s head, a snake and an eagle. Besides all the paying symbols, there is also a scatter symbol, two different wild symbols (Tower wilds and Battle wilds) and a mystery symbol. The wilds are substitute to all symbols but the scatter symbols, and the mystery symbol can transform into any symbol except for the scatter symbols, tower wilds and battle wilds. All mystery symbols transform into the same symbol.

Tower wilds can appear on reels 1 and 2 in the base game. If they appear, they can expand to cover the reel they land on partially or entirely. The wilds are substitute to all symbols but the scatters, and they will not expand to cover scatters.

Landing a fully stacked mystery symbol on reels 3 and/or 4 in the base game activates the mystery multiplier feature. This makes Conan fight a snake, and depending on the times he hits it with his sword, the multiplier goes up. The multiplier can land between 3x and 7x, and is not activated in case of a no-win spin. The Mystery Multiplier multiplies all wins.

If a fully stacked mystery symbol lands on reels 3 and/or 4 in the base game with a Tower Wild or Battle wild on a reel as well, the Thoth-Amon feature is activated.

If the Thoth-Amon feature is activated, 3 – 6 Mystery symbols are randomly added on reels 2 – 5 on any position that is not already covered by another mystery symbol, scatter or a wild symbol. If there are no positions available, the feature ends.

Battle wilds can appear on reels 5 and 6 in the main game and expand up to 3 symbol positions sideways to an adjacent reel (only on reel 5 or 6). Battle wilds can expand to positions already occupied by a wild.

In the city of Thieves free spins bonus, Tower Wilds can appear on all reels. When the wilds appear on a reel, they can expand up and/or down to cover the reels partially or entirely. No other features except the linked reels can be activated. Volatility: Low / Medium.

Temple of the serpent free spins

The Tower Wilds and Battle Wilds are not active during this bonus.

In the walls of Tarantia free spins bonus, Battle Wilds can appear on all reels and expand to up to three symbol positions sideways to an adjacent reel. No other features, except linked reels can be activated during the bonus. Volatility: Low / Medium.

No matter if a player knows Conan as the cinema character or not, this slot is an adventure to place bets on. The amount of features available alongside the great graphics and animations makes the slot intriguing and exciting every time a spin is made.

The RTP of the slot is decent, and with the possibility to choose the free spins bonus when prompted, the players can choose their own destiny, and decide for themselves if they want to go for the maximum win of 2016x their bet size, or for smaller wins more often.

With a minimum bet size of all the way down to €0.20 and a maximum bet size of up to €200 it is also a slot that invites in the variety of players. It is a perfect place for high rollers as well as low rollers.