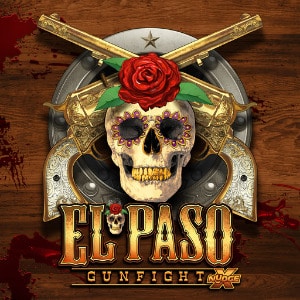 Inspired by the Wild Wild West, El Paso Gunfight is a slot machine powered by global software provider Nolimit City. Get ready to do some heavy gun slinging because this 5 reel game is offering up to 43,334 ways to win with 8 bonus features, Jumping Wilds, sheriff’s badges and free spins. Learn more about the latest release from Nolimit City in this review.

Aside from this rather unique gameplay option, the mechanics of this slot are quite standard. To form winning combinations you need a minimum of 3 matching symbols across adjacent reels from left to right. Stakes range between 25p a £50 per spin. In other words, this is a game for all pocket sizes. To see available bets, just click on the $ symbol left of the game grid.

The El Paso Gunfight slot has an RTP of 96.06% which is slightly above average. The hit frequency rate is set at 28.48%, which means approximately every fourth spin will result in a winning combination.

As you probably have guessed already, this is a gunslinger’s game (figuratively speaking) inspired by the Old West. The star of the show is outlaw Dallas Stoudenmire whose best friend is a 44 caliber Smith & Wesson. He is actually based on a real historical figure who earned his fame during the 1881 Four Dead in Five Seconds Gunfight that occurred in El Paso, Texas.

The backdrop for the El Paso Gunfight Slot is a dusty saloon with a wooden cabinet of liquor bottles and beer jugs. On the reels we have all the classical A, K, Q, J and 10 royals. The higher value symbols consist of a bunch of characters, including a marshal, a constable, a ranch owner and Stoudenmire himself acting as wild. The highest value symbol is Marshall Campbell who rewards up to 6x your total stake depending on how many you land in a winning combination.

Visually, the game is reminiscent of other slot games in the same niche (Bonanza ring a bell?) and the uplifting soundtrack does its share to keep the game at a high tempo. As with all slots from Nolimit City, this one can be played across all devices without the graphics or animations being affected by smaller-sized screens.

You have up to 8 bonus features in the El Paso Gunfight slot:

The Stoudenmire xNudge Wild feature consists of 3-row high stacked wild symbols appearing on the center reels. With every nudge, the win multiplier increases by x1. Several wild multipliers can land in a single spin and when that happens they add value to each other’s multipliers, building potential win multipliers of up to 9x.

The Gunfight Spins feature is activated when 3 scatter symbols land across the middle reels. You start the free spin mode with 8 awarded spins. All activating scatters then morph into Jumping Wilds that jump over to a new position with each spin. If a wild symbol turns up on the same reel as a Jumping Wild, the win multiplier doubles. If a Badge lands on the reels an extra spin is awarded. The Deputy or Marshal Badge can also trigger a Deputy of Marshall Gunfight Spins feature.

The Drunken Gundfiguth&r Spins feature is triggered when 3 scatters plus a Marshal AND a Deputy badge land on the reels in a base game spin. You’re rewarded with 10 free spins on a 4-3-3-3-4 grid with 5 Jumping Wilds (former scatters).

If you’re lucky enough to land all 5 characters in a single base game spin, this will activate the 4 Dead in 5 Seconds feature. One respin is awarded in which the Stoudenmire wild symbol expands, covering all 3 middle reels.

Saddle up and prepare for a wild ride to the deep American west. El Paso Gunfighter is a game with 8 bonus games, which is quite impressive, but also a bit confusing. All of them are solid free spins features with plenty of action and good chances of getting some pretty neat rewards. It really depends on the volatility level you choose.

The sober way to go about this is probably to play the demo version before you start betting real money. This will improve your chances of hitting the big wins later. Don’t be fooled by the simple setup. Most Wild West-inspired games are known for being straightforward but this is as far from that as a slot game can possibly get.