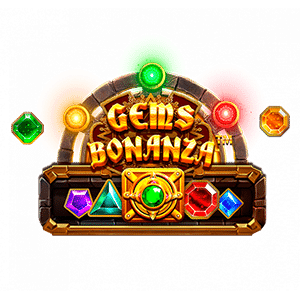 Gems Bonanza from Pragmatic Play is a high variance slot with tumble reels and special modifiers – including lucky wilds, colossal symbol squares and nuclear grid clearance. Activate the Gold Fever Meter every time you hit a win. Look out for reward-boosting multipliers. Learn what it takes to land the big wins in our Gems Bonanza Slot review.

The wagering limits in this game range from 20p to £100 per spin. To adjust your stake, use the + and – buttons on either side of the spin button. If you’d rather sit back and watch the game play out in auto-mode you can do so by adjusting the settings. This literally means the slot will play for you, running between 10 and 1 000 auto-spins depending on your adjustments. For an even faster gameplay, you can also choose the quick and turbo spin options.

The RTP in Gems Bonanza is 96.51%, which happens to be slightly above average. Prepare for a volatile slot that can potentially deliver some huge rewards with a max payout of 10 000x your stake.

As you’ve probably guessed already, sparkling gems are the common denominator here. These precious jewels add plenty to the game’s sharp visual design. All in all, there are 7 stones to play with. The shimmering red ruby is the most rewarding gem in the game. 25 matching symbols or more in a single cluster will pay 1 000x stake and that’s basically all you need from a damn good game day.

As in most slots these days, there’s also a Wild to reckon with. It turns up in the Lucky Wild and Wild Gem modifiers, replacing all symbols on the grid. Modifiers are fired off from a mystical stone statue that stirs to life whenever you hit a cluster win.

Gems Bonanza has been adapted for play across all devices. Yes, the 8×8 game grid does deviate from standard design but the sharp and clear graphics makes it worthwhile no matter what device you’re playing on.

In terms of gameplay features, there’s lots to be excited about in Gems Bonanza. For starters there’s a grid setup unlike any other. Highlighted spaces behind random symbols can set off a host of modifiers that will boost your chances of winning. The Gold Fever Feature is where you work through levels to activate multipliers. Each level requires that you collect a certain number of collected symbols in order to activate the multiplier. But let’s start first with the tumble feature.

Ever heard of cascading reels? Well, this is sort of the same thing. In Gems Bonanza slot, a standard tumble of symbols occurs on any spin in the base game whenever you hit a win. Symbols will keep tumbling and disappearing until there’s no new winning combination. Since you might actually hit several wins in a single spin, it’s also possible to activate multiple modifiers on that same spin. The 5 modifiers are:

Nuclear: marked in blue. After all tumbles from a single spin are finished, all symbols are cleared and new ones replace them in the grid.

Wild Gem: marked in pink. After all tumbles from a single spin are finished, all instances of one randomly selected symbol transform into wilds.

Squares: marked in golden brown. After all tumbles from a single spin are finished, blocks of 2×2 are added in random positions on the grid.

Colossal: marked in red. After all tumbles from a single spin are finished, a block of 3×3, 4×4 or 5×5 is added in a random position on the grid.

Lucky Wilds: marked in green. After all tumbles from a single spin are finished, 5 to 15 wilds are added to the grid.

Whenever you hit a win, the symbols from the winning cluster are added to the Gold Fever Meter. You need to collect 114 symbols from a single spin to activate the Gold Fever Progressive feature. The next spin will trigger all 5 modifiers in sequence, boosting your chances of winning big. A 2x multiplier is also rewarded. The more symbols you collect, the bigger the multiplier:

This is an impressive and slightly different game that Pragmatic Play has come up with. The slot graphics and soundtrack are key to creating an immersive atmosphere. Gems Bonanza is a high variance slot so the modifiers are really helpful in keeping the pace up on the cluster pays engine. What can really boost your gameplay, though, is the Gold Fever Progressive Feature. Collect enough symbols and you’ll sail right through the levels where bigger multipliers come into play.

If you’re into slots with visuals that shine, innovative features, cluster pay mechanics and a bombastic variance, this is the definitely slot for you.