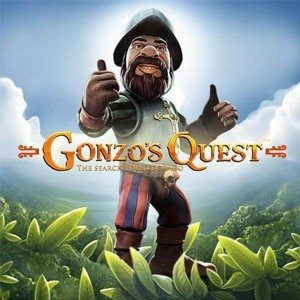 Go on an adventure with Gonzo to look for the big wins on Gonzo’s Quest. The slot was released in 2011 by NetEnt and comes with a RTP of 95.97%. It is considered a medium to high volatile slot and has five reels and three rows. There are a total of twenty paylines, and the bet size ranges from €0.20 to €50 per spin. The maximum win available is 2500x the bet.

If you’ve ever wanted to feel like Indiana Jones going on an adventure, now is your chance! Go with Gonzo on a quest in the Incan temples to find the Golden Free Fall symbols and open up the hidden gates of the temple. The symbols on the slot are visualised as 7 creatures and men from the Inca Empire carved in stone. The stones having creatures carved in them are the lowest paying and the stones with men carved in them are the highest paying. The wilds on Gonzo’s Quest is a yellow question mark on a grey stone. Wilds are a substitute to all symbols, even the scatters as well. The scatter symbols are visualised as a man with his tongue out carved in the purest gold existing in the Inca Empire. The scatter symbols also go by the name Free Fall symbols.

As the beautiful carved stones show up on the reels and rows of Gonzo’s Quest, they magically disappear when a paying line is achieved. When the symbols connecting disappear, the symbols that are not a part of the connection drops down. This activates the avalanche feature and makes new symbols appear from above and drop down to fill up the reels once again. Each time an avalanche happens, the multiplier feature is activated. This makes a multiplier go up, and increases the win made if the symbols dropped in the avalanche forms a new connection. The multiplier starts on 1x on each spin, and with avalanches it can go all the way up to 5x in the main game.

When no new winning connection is made after the symbols drop down, the multiplier is reset back to 1x and new connections and avalanches are needed to make it increase once again.

If a total of three Free Fall symbols or wilds are forming a winning connection starting on reel 1, the free spins bonus is activated. The free spins bonus on Gonzo’s Quest comes with a total of 10 free spins no matter the amount of free fall symbols or wilds connected. In the bonus it’s possible to get a re-trigger and get extra free spins. The Free Spins bonus works just as the main game, but it comes with an upgrade multiplier feature. All wins in an active bonus are by standard multiplied by three, but with 4 or more avalanches in a single spin, they can go all the way up to being multiplied by 15!

Even though the game was released in 2011 it is still optimized for both iOS and Android devices. This makes it accessible through both mobiles, tablets and desktop computers as long as a browser connection is possible.

Gonzo’s Quest is an amazing slot that gives an experience to all types of slot players. With the chance of winning up to 2500x on a single spin, but also the chance of getting a lot of decent wins throughout a session, it can be both intriguing and exciting. The slot differs from many other slots that comes with 5 reels and 3 rows. The avalanche feature with an added multiplier is not something usually seen on slots without megaways. We believe all players should give Gonzo’s Quest a try and go on the search for gold in the Inca Temples.

Try out Gonzo’s Quest on one of our NetEnt Casinos, or find your next casino bonus offer on our complete casinos list. Read about other online slots and find your favourite in our selection of reviews.