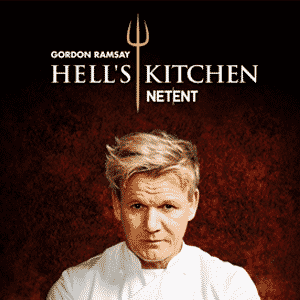 On March 25 2021 NetEnt are releasing their brand new video slot that is designed with Gordon Ramsay’s show Hell’s Kitchen in mind. The game comes with 5 reels, 3 rows and 20 fixed betlines. The RTP is 96.07% and the volatility is low.

Everyone who has watched Hell’s Kitchen knows the signature dishes all the chefs have to cook. These dishes represent the highest paying symbols, where the first is the Beef Wellington. The second highest paying symbol is the spicy burger, and the next item on the menu is Gordon Ramsay’s signature cocktail. The other symbols on the slot includes the sticky toffee pudding, and the classic royals. A win is obtained by getting three or more matching symbols on a paying line from the leftmost reel towards the rightmost reel. Wilds can appear at random on the reels and they substitute for most symbols.

Gordon is known for his temper when he is in a kitchen. He often throws pans, undercooked meat and other stuff on his chefs and in the base game; he might do so as well. When he gets mad, he throws knives, plates or pots at the reels, which then turn symbols into wilds. With Ramsay’s wilds, it is possible to get between 5 and 7 wilds, and they substitute for most symbols.

If Free Spins are awarded while playing, the player will be presented with a choice. The player has to choose between the red team and the blue team. The two teams then go head-to-head, but all winnings are awarded no matter the team chosen. While the teams go head-to-head, bonus features like multipliers or random wilds might happen, which makes it possible to land some decent wins.

The brand new slot is optimized for all operating systems, which makes it possible to play on mobiles, tablets and desktop computers. Both iOS and Android are supported.

Hell’s Kitchen is a great way for players to continue the excitement given from the TV Show. The features and bonus available on the slot makes it possible to get some decent wins, and with a volatility that is considered low, it might be a decent slot to wager on. Unfortunately, players have to wait a little bit before being able to give the slot a spin or two. While waiting we recommend checking out our other slot reviews, or maybe give our list of online casinos a look. We also have a list of NetEnt Casinos, where the slot will be available when released.