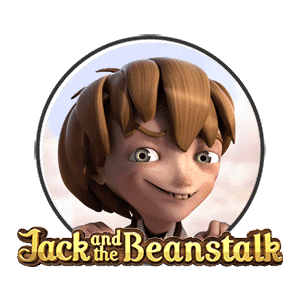 Jack and the Beanstalk Slot Review

Jack and the Beanstalk is a slot published by NetEnt in 2011. It’s considered a high volatile slot and comes with a RTP of 96.28%. The game is built up with five reels, three rows and a total of twenty paylines. The minimum bet is €0.20 and the maximum bet is €100!

Jack and the Beanstalk Theme

The slot is built up with an adventurous design, birds chirping in the background, and symbols that match the fairy tales story. There’s a total of 5 premium symbols and 5 low paying symbols. The low paying symbols are illustrated as the playing cards going from 10 to A. The high paying symbols range from a watering can to Jack being the highest paying symbol. The other three premium symbols are represented as an axe, a goat and the two headed monster. Besides the normal symbols the slot also comes with a scatter looking like an open chest with shining purple beans in it. The wilds simply spell out “Jack and the Beanstalk” on a red background.

When playing Jack and the Beanstalk, players will be met with various features. These features include the walking wild, a free spins bonus, 2 stacked money bags, 3 stacked golden hens, an expanding holden harp and last but not least a key.

When a wild appears on the reels, a re-spin is rewarded. During the re-spin the wild symbol moves one reel to the left and another re-spin occurs. The re-spins continue as long as there’s a wild on a reel. This feature appears both in the main game and in the free spins bonus.

If a wild is part of a winning line, the coin win from the spin is multiplied by 3x. Wilds substitutes for all symbols except scatter and key symbols.

If a player manages to collect a total of 6 keys, the wild symbols are upgraded to stacked golden hens. This means all wilds appearing on the reels afterwards are stacks of three instead of two. Being stacks of three, doesn’t mean all three wilds are guaranteed to show on the reels.

The ultimate feature in the treasure collection is the expanding golden harps. The golden harp wilds expand when spun in, making them cover up a whole reel.

Jack and the Beanstalk on Mobile

Even though the game was released back in 2011, it’s still optimized for mobile users. This means it can be accessed through mobiles, tablets and desktop computers. The game is optimized for both iOS and Android devices.

If you enjoy playing adventurous slot games with a lovely design, great animations and sounds that fit accordingly. Jack and the Beanstalk is a great choice. The game was published in 2011, but is still to this day a very popular slot, and we understand why. It comes with a lot of great features, a decent RTP and with the high volatility it gives players a chance of winning big. If you want to try it out, you should check out our selection of NetEnt casinos, where you’ll be able to find your new favourite casino. If you want to read about other slots you can check out our video slots section, where we weekly post new reviews!

Jack and the Beanstalk Slot ReviewInfo