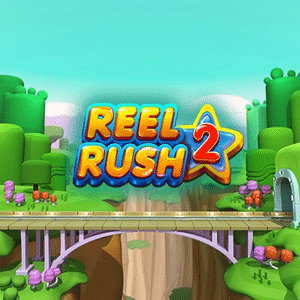 Reel Rush 2 is the successor of the popular NetEnt game Reel Rush. It was released by NetEnt in 2019 and is optimized for both mobile and desktop users. The slot comes with a RTP of 95.53% and is considered medium to high in volatility. Like the old Reel Rush it also comes with 5 reels and up to 3125 bet ways.

Reel Rush 2 comes with an upgraded version of the old design. The symbols still look similar to the symbols seen in the previous version, and there’s still a total of 11 regular symbols and 6 premium symbols.

The thing that has changed from the previous version to Reel Rush 2 is the amount of random features added. It’s possible to get one of the 8 features randomly on all spins, where 2 of the features are only available during a bonus. Besides the random features there’s also added super tokens, super free spins and a gamble feature when getting the free spins bonus. The main game of the slot works the same way as the old version, where each win makes the amount of ways increase. The maximum number of ways possible is 3125 as on the old version.

When playing in the main game, it’s possible to collect super tokens, which can be used to get the super free spins bonus instead of the regular one. A total of 1-5 tokens are collected into the super token meter each time a block is unlocked.

The second chance feature is represented by a big red heart and three smaller hearts. The feature makes it possible for the player to receive a re-spin, if the first spin is a no win situation. No blocks are unlocked by the re-spin, unless the block breaker feature is awarded at the same time.

The block breaker is a red cannon that can destroy 2 or 4 blocks. This increases the amount of bet ways and brings the player one step closer to getting the free spins bonus.

The random wilds feature can appear at any time, giving the player 1-3 wild symbols randomly on the reels. The wilds cannot be placed over a wild symbol, a locked block or on reel 1.

When the symbol upgrade feature arrives with the feature train, a random symbol is upgraded after the reels stop spinning. The symbol selected is transformed into the symbol before it in the paytable. This upgraded symbol substitutes all the instances of the original symbol on the reels.

The extra super tokens feature adds 3 or 15 tokens to the Super Token Meter.

The extra free spins feature awards an additional free spin to the player. This feature is only available in the free spins bonus.

The Multiplier Boost feature increases the multiplier meter with 1. This feature is only available during the super free spins bonus.

The Free Spins bonus on Reel Rush 2 is awarded to a player, when the player manages to get a total of six re-spins in a row (Or get all the blocks destroyed with random features). When the bonus is obtained, a free spins screen opens up. On the free spins screen it’s possible for players to upgrade their bonus to a super bonus. Both bonuses have 3125 bet ways and 8 free spins, but on the super bonus a progressive multiplier is activated. The progressive multiplier increases each time a win occurs or when the multiplier boost random feature is activated. There’s three ways to get the super bonus:

A player can buy their way up to the 2000 tokens mark, which makes it possible for them to get the super bonus.

If a player does not have enough super tokens, they can choose to gamble the ones they have. This gives them a chance of getting the super bonus with less than 2000 tokens.

If a player has collected a total of 2000 super tokens or more, they can select the super bonus and click start. This will take them directly to the super bonus.

Reel Rush 2 is optimized for both iOS and Android devices. This makes the game accessible through both mobiles, tablets and desktop computers.

Reel Rush 2 is a great example of how a provider can take an old game and give it new life. It’s great how NetEnt has upgraded a game without removing the soul of its predecessor. It comes with a slightly lower RTP than the previous version, but with the super free spins bonus added, the volatility has been upgraded to a whole new level. Try out the game by finding a casino offering video slots from NetEnt on our complete list of NetEnt Casinos. If you want to see all casinos available on BonusCatalog, you should check out our casino bonus list. If you want to read about other video slot games, we recommend checking out our video slots section.